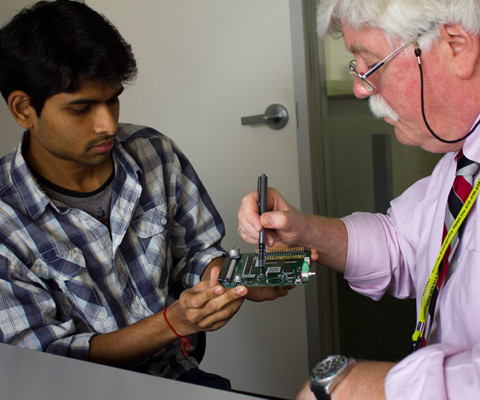 In olden times, when we needed to carve something out of metal, we grabbed a chisel. In more recent times, you'd head to a machine shop. If you're an electronics company like Nexas Networks, though, you provide and maintain a better solution in the form of a  Computer Numerical Control (CNC) Machine. Essentially high-tech sculpting, you take a block of metal, program in the shape you want, and watch as the CNC Machine creates it. The aerospace and automotive manufacturing industry lives off them, and Nexas Networks develops their electronic innards.

We've all reached that point with our computer, or our phone, or a piece of software, where it needs repairs, but the parts are no longer available. The conventional wisdom is "buy a new one," but sometimes, that's just too expensive of an option. Now imagine that, on a massive scale. Nexas Networks faced that problem when their client's CNC machines needed new memory cards, and the original Yaskawa cards were no longer being produced. A CNC machine cost is very high, so replacing them was a massively inconvenient option. That's where Centennial College came in.

Partnering with ARIC, Nexas worked with a group of Centennial students led by Professor Glen Taylor to design and prototype a new memory card for their CNC machines. In a slim four months, they managed to reverse-engineer the old card, and make a newer, faster, and smaller model. On top of that, it was also cheaper, at less than a quarter of the original's price. They also added a host of new features, including backup power, meaning the machine won't forget the shape you programmed into it when the lights go out.

For Fernando Chung, one of the student researchers, it was a monumental learning experience. "You learn more on a project than the whole 3 year program," he says. "This is the real world, where you get the problem and you find all possible solutions, and discuss and apply them to approach the desirable outcome.

The aerospace industry relies on CNC Machines to create the parts for their products, and were certainly grateful for this breakthrough. Tom Gaasenbeek, president of Nexas Networks, was so impressed, he directly hired one of the student researchers. "The Nexas i80 Memory Upgrade project was "a test - a challenge," he says, "that Centennial rose to and met in the end. In short, well done, team!"