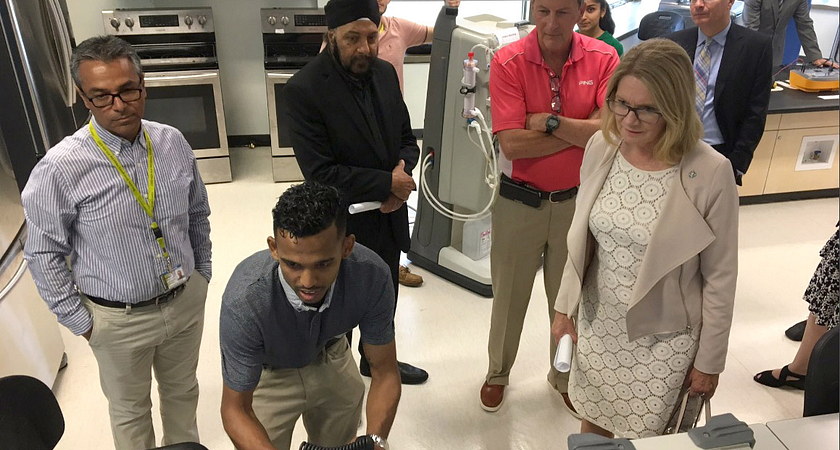 On July 21, the Honourable Kate Young, Parliamentary Secretary for Science, and the Honourable John McKay, MP for Scarborough-Guildwood, came to Progress Campus to have a closer look at the applied research capabilities of Centennial College, which have helped to rank Centennial among the top 10 research colleges in Canada.

Dr. Eric Blaise, ARIES’ Innovation Program Manager for Aerospace and Surface Transportation, offered an overview of new developments in health, energy and aerospace, highlighting the May 2017 announcement of $2.3 million in funding from the Natural Sciences and Engineering Research Council of Canada (NSERC) to investigate electric landing gear for energy-efficient aircraft. In addition, the visitors got an update on the construction of the Downsview Campus that Centennial plans to open in January 2019. It repurposes the historic de Havilland manufacturing site into a state-of-the-art training and research hub that is expected to draw a number of education and industry partners.

Predrag Pesikan, Chair, Information & Communication Engineering Technology (ICET), led a tour of the Samsung and Biomedical labs, and students showed off some of their robotics technology. The visitors then got a short demonstration of a breast-feeding app developed by the college’s Wearable, Interactive and Mobile Technologies Access Centre in Health (WIMTACH) in partnership with Scarborough and Rouge Valley Hospitals. The app is designed to help new mothers with helpful answers to questions they have relating to feeding, as well as issues such as crying and bowel movements.

Vikramjit Singh, Research Associate at WIMTACH, demonstrated the app and explained that the device is “easily scalable” from the English/Chinese/Tamil version available to date (currently available for Android and soon to be at the App Store). The guests were then shown a high-tech pill dispenser, which WIMTACH is developing to assist elderly patients and those who have complex pharmaceutical regimens.

Donald Wang, Chair, Advanced Manufacturing & Automation Technology (AMAT), and Arunangshu Hor, Professor and Program Coordinator at the School of Engineering Technology & Applied Science (SETAS), gave the MPs a tour of Centennial’s green energy projects. McKay was shown a wind/solar-powered security camera with a unique wireless control system, and then learned how an absorption chiller, hot water tank and chilled water tank operate. He was keenly interested in sustainable energy, apologizing for “having so many questions” as Centennial researchers gave him the details on technical issues such as glycol heat evaporation and solar chiller operating temperature.

Visiting a parking lot isn’t what typically springs to mind when you think of a campus tour, but the walk outdoors provided the opportunity to show off the college’s off-grid hybrid wind/solar-powered street lights with three different design Vertical Axis Wind Turbines (VAWT), also discussing how they function in the real world.

Centennial’s research projects, which employ students in tasks related to their studies, are supported by FedDev Ontario, NSERC Applied Research Tools and Instruments (ARTI) grants, as well as key industry partners such as Clear Blue Technology, Celestica and the Renteknik Group Inc. At the tour’s end, McKay remarked that “there’s so much going on in Scarborough that people don’t know about.” With applied research rapidly becoming the purview of the college system, tours like this one will hopefully raise awareness of promising innovations that will change the way we live.