If you haven't signed up for orientation, here's why you should 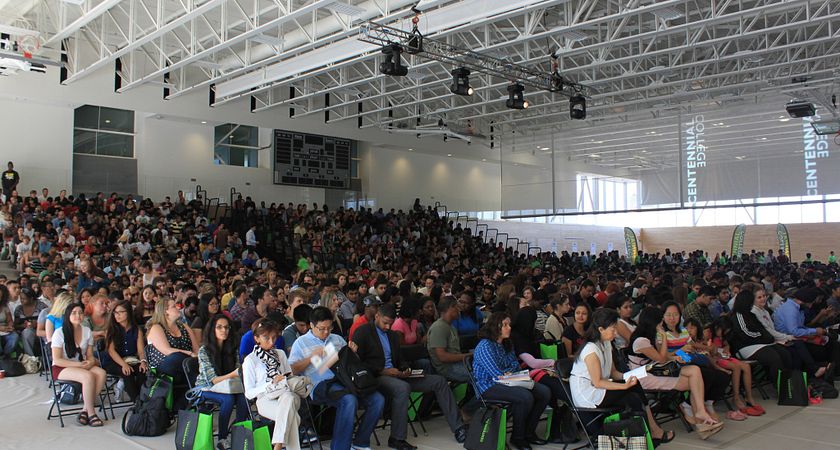 Centennial College's 2015 Orientations for new students happen in a short few days across all campuses, and if you have not already registered, now’s the time. However, if you're starting school and staring down the last few days of freedom, or if it's just a pain to get to campus, you may be tempted to skip out on orientation entirely. It's worth going to, though, since it will give you a head start on preparations for school. Here's a few more words on why you should be attending.

You'll have some idea of what you're getting into

As prepared as you are for college, there's still that sense of the unknown. What's it really going to be like when you get there? What’s the atmosphere? What’s the program like? It's more than just the people and places of the school that make up the atmosphere, and being there is the best way to get a sense of what your schooling will feel like. That being said, there are some more specific fact you can find out.

You can figure out where everything is

Odds are you haven't set foot on campus before, or haven't really explored it. There’s always a tour during an orientation, and now’s the perfect time to figure out where in the big building all your classes are, and how long it will take you to get to them. It’ll save you a lot of stress and running around on your first day. Speaking of running around, you’ll also learn about the facilities on campus, like the gym, where to eat, what the library offers, and other useful student resources. All in all, you’ll want to at least get a look at the space before you arrive.

You can get to know your teachers….

There's important reasons for this, as Thought Catalog writes. If you don't already know about networking, expect it to be hammered into you as a Very Important Thing over the next few years. Essentially, it's all about meeting and becoming friendly with influential people in your industry, in the hopes that those connections lead to jobs and other career opportunities. In college, your instructors are usually industry professionals rather than simply professors, and getting to know them could result in acquiring a mentors as well as a teacher. And on a more practical side, these people may be teaching you for years, so you might as well get to know them now.

Your orientation will include a portion specific to your program, and while there, you should get to know your classmates. After all, you'll be deep into the program with them for at least the next year, so it'll benefit you to get a handle on who you're going to be spending time with. And speaking of that networking mentioned earlier, your classmates are the next step, since post-graduation, they'll all be getting into the same field as you. Even if you're meeting students who are not your classmates, socializing with as many people as possible will benefit you, particularly if you're on a smaller campus where you'll be seeing the same faces. If you're feeling nervous, remember that everyone else there probably is, too.

There's a LOT of stuff you need to pick up

On a more business-related note, you'll have a lot of important items to take care of that you can knock off over the course of the orientation day, instead of having to wait until school starts and having to find time between classes and studying. These include a timetable if you don't have one, your student photo ID, and your parking pass if you're driving (but parking will be free during the orientation). You'll also get set up on the school's myCentennial intranet system. All of these things will be a lot simpler if you take care of them before you have to start worrying about classes. Additionally, there's also the chance to grab some free stuff, including a grab-bag of small, useful items the CCSAI usually hands out. Speaking of them….

You can connect with the student council, as well as some clubs.

During your orientation, the CCSAI will give a presentation about who they are, and what they offer. This is the ideal time to have a look at any clubs and organizations you wish to join, as they'll all be laid out for you look at, instead of needing to be sought out during your classes.

And it's worth doing, because again according to Thought Catalog, your time in school will go by faster than you think, and spending some time in an organization or club will teach you valuable lessons about teamwork that you may not get in a classroom setting, and can be valuable to your future.