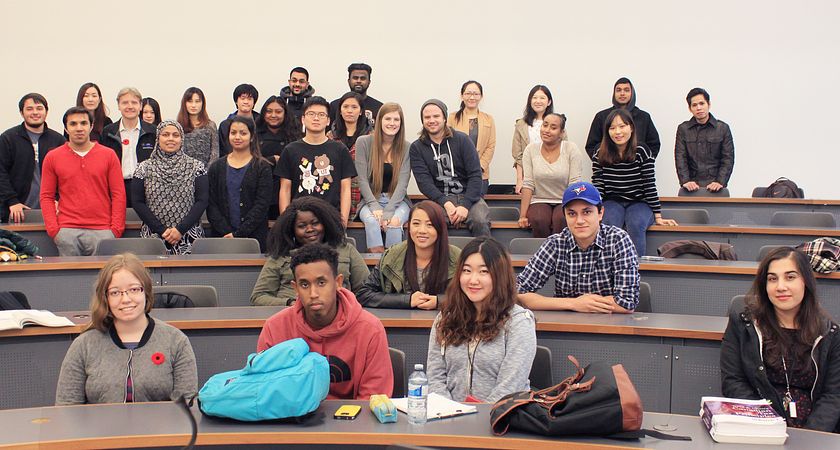 There’s more than learning and career development at Centennial College. One of the school’s commitments is to foster social development and responsibility. While the college participates in large-scale initiatives, our caring, talented faculty also engage in their own special initiatives. Murray Davidson teaches economics, and created a special United Way donation contest with his class last year, to great success. He decided to directly contribute to the social economy along with his students.

“Last year I experimented with the idea of having a class donation to the United Way on a matching program,” Murray says, “meaning I would match whatever the class contributes. It went over very well, students donated quite a bit of money, so I decided we’d do it again.”

Rather than being something large and elaborate, Murray tried to keep it simple, making it easy for students to take part. “It’s pretty casual,” Murray continues, explaining how it works. “Students voluntarily contribute, I match it, and we have a little contest with prizes for those whose names were drawn. The total funds at this point are about $160, which is a good contribution. I was very proud of the students. It’s a great cause, and it’s a way for students to contribute. It’s good for the college to have the students involved in the campaign.”

Among the winners drawn were Jessica Cook and Andrew Carney, who would be joining other students for a get-together of contest winners and a few games of billiards at a pub, with Murray footing the bill.

“I’ve always given donations,” Jessica says about participating in the contest. “whether it’s volunteering my time with the United Way, which I’ve done before, or just donating to people who don’t have anything. It’s about support and getting involved.”

Andrew’s motivation was a bit more simple. “I donated because Mr. Murray is a great teacher,” he says.

Regardless of who won the contest, everyone in the class who donated to the cause felt a sense of pride. “I just like helping any cause that makes a positive difference in someone’s life,”says Ramla Ahmed, another donor. “Even the smallest contribution can help someone, right? And I just like helping people.”

“It’s economics,” Murray says of the donation, “only we’re talking about the economics of the country. There’s also a tie-in with the School of Business in general, because this is a marketing approach to raising funds, which the school supports.”

Either way, he’ll continue running the contest yearly, since it represents a straightforward way for students to contribute to the social good. “The contribution is a key point,” Murray says. “No matter how small, it’s a contribution to someone’s wellbeing. Every little bit counts.”