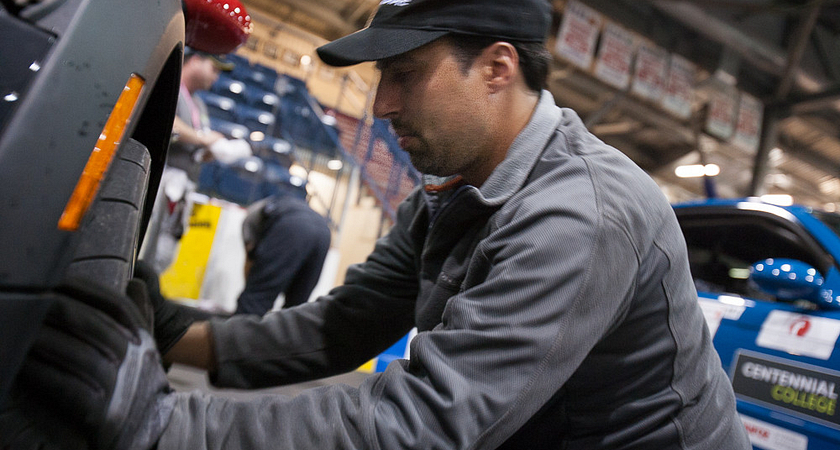 Scarborough’s Hume Media racing team had its most successful year at Targa Newfoundland this September thanks, in part, to the technical skills of Centennial College professor Garrett Nalepka, who worked hard to keep the team’s three cars running during the tough five-day race.

When the dust settled and the 14th annual pursuit around the island province concluded, Hume’s three-car team finished first, second and second in their respective divisions. The race began and finished in the city of St. John’s, involving 1,800 km of paved and gravel roads and 40 high-speed stages.

Typically almost one-third of the vehicles that start the race do not finish due to mechanical failure, and many of the cars that do finish are held together with duct tape. Having a skilled and inventive technician on hand is key to completing the race route. That’s where Centennial’s Garrett Nalepka comes in.

“Garrett was a huge asset to the team. Without him we would not have had those two second-place finishes we managed to pull off with the 2006 Mini GP and the 2004 BMW M3,” said team leader John Hume Sr.

Garrett is an automotive tech professor in Centennial’s Chrysler program, and has experience supporting a Dodge Viper racing team in the World Challenge B Series, which tours a lot of U.S. tracks. This was his first experience wrenching for a rally event.

“I’ve never been in a race that lasted five days! It’s all about endurance and keeping the cars going and keeping the drivers safe,” says Garrett, who admits the early morning starts and late-night repairs made for a grueling schedule. He was the lone technician on the team, responsible for keeping three race cars running.

“Typical fixes involved suspension adjustments and repairs. The Minis had to be raised on their suspensions to minimize damage on the rough roads,” he explains. A lot of repairs were done after hours in hockey arenas set up as makeshift garages. Garrett had to fabricate parts in some instances, since his minivan could only carry so many spare parts. And he largely worked with hand tools.

“We had a few breakdowns in and between races,” Hume explained. “Garrett was there each time to get the cars back into action without missing a beat. His ability to think and react instantly on the fly saved us from missing any race legs and hence losing any unnecessary penalty points.”

In the end, skill and perseverance prevailed and the Hume Team cars crossed the finish line with excellent scores. The team also managed to raise $23,000 towards multiple sclerosis (MS) research from its generous donors – a great outcome that amounts to a win for everyone.