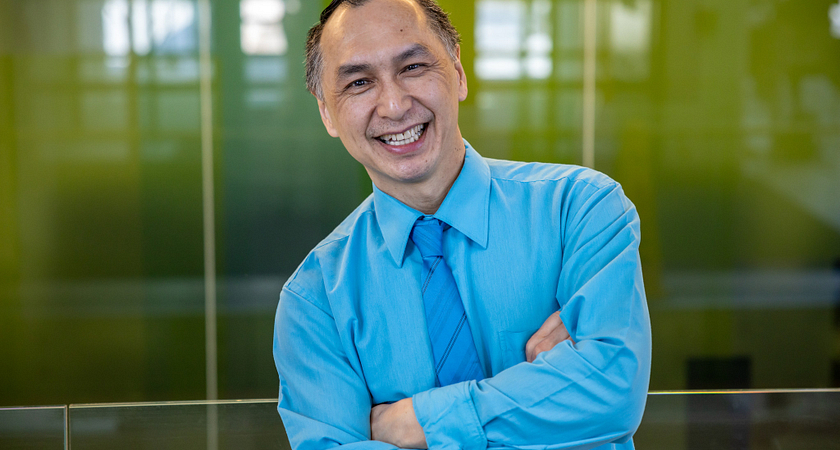 At #CentennialStars, we recognize leaders, legends and unsung heroes of the College. Anyone, be they students, faculty or staff, can be a Centennial Star if they’ve done extraordinary things or gone above and beyond the call of duty.

“Being creative and making money in 50 minutes, how do you do it?” asks Phil Lim, trainer/instructor and employee at Centennial College. Phil comes from a family of seven and is talking about not having lunch, or money for lunch when he was younger.

“When you’re really hungry, you’re going to find a way,” he says. His way was to run to a local car dealership during his lunch break and offer to pick up food, cigarettes or anything else for the salespeople so they wouldn’t have to leave (and maybe lose a sale), in exchange for a tip he’d use to buy his own lunch.

“I grew up in the school of hard knocks, and have always been a believer that living the life of excitement and learning things the hard way was the best way to learn,” Phil says. “I always believed you had to hustle, create opportunity and be creative.”

It’s stories like that which inspire the Hospitality students Phil teaches. His entire lengthy career working in hospitality involved positions in restaurants, hotels, banquet halls and conference centres. Phil’s first job was as a bus person clearing tables, before being assigned in hot and chaotic kitchens. His career path led to six promotions from Short Order Cook to Kitchen Manager, to Restaurant/Banquet/Catering/Food & Beverage Management.

“When I landed here at Centennial, I never turned back, so maybe there was something here for me in teaching and training students,” Phil says.

Phil’s been at Centennial College for almost 16 years in various capacities. He started working as a Banquet Captain, before moving up to being a Catering Manager. He now works as a Food and Beverage Equipment Technician when he isn’t teaching. It was while working at the College’s banquet facilities that one of Centennial’s professors recommended he take a course to learn to become a teacher since he was great with students and full of patience.

“I said there’s no way I can do that,” Phil recalls. “I haven’t been to school in years! But he kept pushing and saying you should go for it, so I took him up on it and gave it a shot.”

Phil enrolled in his first class of Centennial’s Teacher/Trainer of Adults program, but then withdrew, thinking it wasn’t meant to be. But his mentor encouraged him not to give up and try again. The second time proved to be the charm.

After graduating from the Teacher/Trainer of Adults program in 2009, he went on to study professional sales to further augment his experience, even winning an award from the Canadian Professional Sales Association for his strong performance in the course. Then Phil was called upon to teach the Beverage Knowledge, Mixology and Service course, thanks to unexpected circumstances, while the regular teachers were away for the summer.

“A plane just arrived from India with a whole bunch of students coming to Centennial and they said they’d all enrolled in Mixology and Beverages, and they didn’t have a teacher, so they said Phil, can you teach it? ” Phil explains. “Because I’d just gotten my certification, I said sure with a ‘YES I can’ attitude, but how am I going to manage the catering office while teaching three classes?”

He did, though, by putting in long hours to make it happen by staying on campus until almost midnight, preparing himself mentally and physically to be an instructor and trying to “motivate and inspire the students.”

“I believe in hands-on learning,” Phil says about his teaching philosophy, “because I come from a background where you learn the hard way, which is the best way.”

“I also believe everybody should have a good role model or a mentor who can impact their own lives to take them to the next step. The greatest thing about working at Centennial is being a part of the students’ learning and knowing you’ve made contributions in their education and to their experiential learning. This gives you the fulfillment that you have done a great job,” he says.

His students seem to agree. Out of all of the Centennial Star nominees so far, Phil is the one with the most requests. He was also nominated for the 2014 Diane Fagel Support Staff Excellence Award at the College and for the John C. Maxwell Leadership Award recognizing the Top 100 North Americans. Phil also earned the Centennial College Employee Leadership Passport in 2017.

“Most of the students who nominated me were the ones working in the old Conference Centre across the street, which is now the T-Block, where I was training them hands-on,” Phil says. “By inspiring them, believing in them, giving them confidence and making sure that when they graduate, they have some kind of direction and goals.”

He gives an example of one international student whose husband became ill and had to fly home, leaving her to either stay alone or withdraw from the program and return home as well. She didn’t know what to do and had an hour-long chat with Phil in his office about her dilemma. She decided to stay at Centennial, but he referred her to a counsellor, insisting being there for her husband was more important. She eventually flew home, but stayed in touch with him, grateful for his support.

“It just makes me feel like I’m doing something right. Not only for the college but for the students,” Phil says. “You can never stop learning in today’s world. There is so much to learn and improve in our profession as teachers/trainers, or in any other profession.”

Do you know someone who deserves to be a Centennial Star? Nominate a student, faculty member, or college employee here.