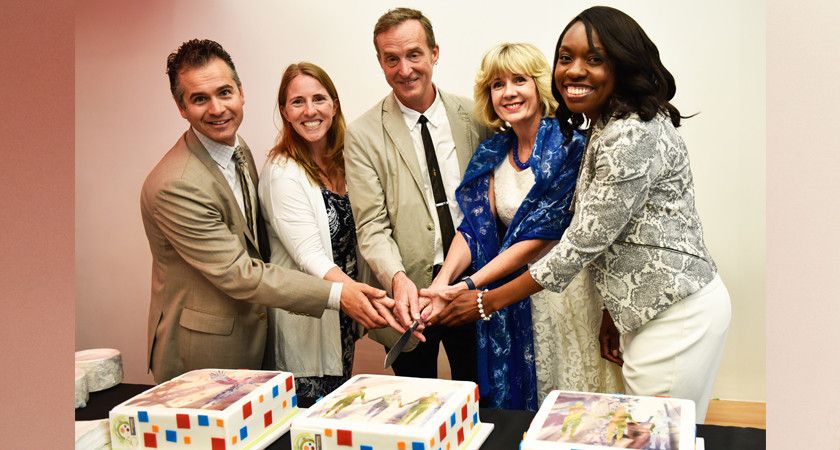 “Art that’s in the public domain tells a bigger story, and so we started the President’s Art Project as a way of getting that art out there,” Centennial College President Ann Buller told the audience that gathered outside for the unveiling.

“It really does tell the story of courage, determination, and inclusiveness that has defined this institution for the past 50 years,” she said of the colourful mural. “Like the silhouettes in Gavin MacDougall’s work, we stand united in our commitment to helping every student not only to succeed, but soar, and that’s really what this image represents.”

The mural competition was intended to show off the artistic talent of Centennial’s students and alumni. Thanks to Knightstone Capital Management Inc., which built the CRCA, the college was able to award MacDougall with a $10,000 cash prize.

“The artwork speaks to the importance of education, community, cooperation, and diversity. Individual obstacles and limitations are overcome when people unite,” MacDougall told the crowd. He thanked the college, judges and the many people who helped bring the mural to life. “We build upon foundations established before us, and with guidance, instruction and determination, we move forward. Joining together, we rise above and dare to achieve.”

MacDougall’s five-panel mural was digitally processed, fabricated and installed on the north side of the residence building, where it will be on permanent display at Progress Campus. MacDougall’s work can also be found in Art Interiors in Forest Hill Village, Latitude 44 in The Junction, and Project Gallery in Leslieville.