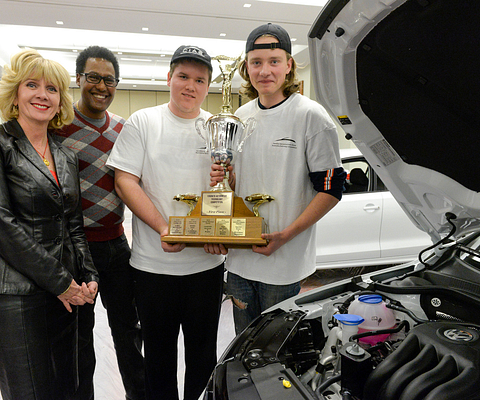 Two automotive technician students from Philip Pocock Catholic Secondary School in Mississauga beat out 18 other Toronto-area high school teams to win a high-octane skills competition at the Canadian International AutoShow on Feb. 12. Michael Macut and Alex Morrison performed a number of timed technical tasks and worked on a 2015 Volkswagen Jetta that had been rigged with a no-start condition by automotive instructors from Centennial College's School of Transportation.

By finishing first, the pair will be representing Canada at the National Automotive Technology Competition in New York City in April. In addition to the all-expenses-paid trip, Macut and Morrison won tools and equipment from sponsors, as well as a new General Motors vehicle that will be used as a teaching aid in their school's auto shop.

Centennial College and the Trillium Automobile Dealers Association (TADA) have been running the competition at Toronto’s auto show for the past 16 years. The students, all of whom are studying automotive service technology in secondary school, help underscore the importance of the skilled trades to Canada's vast transportation industry.

In addition to the winning students who were recognized, teacher Magid Masoud of Our Lady of Mt. Carmel Catholic Secondary School earned the Gerd Reisenecker Memorial Teacher of the Year Award, named for the late Centennial professor and TADA member.