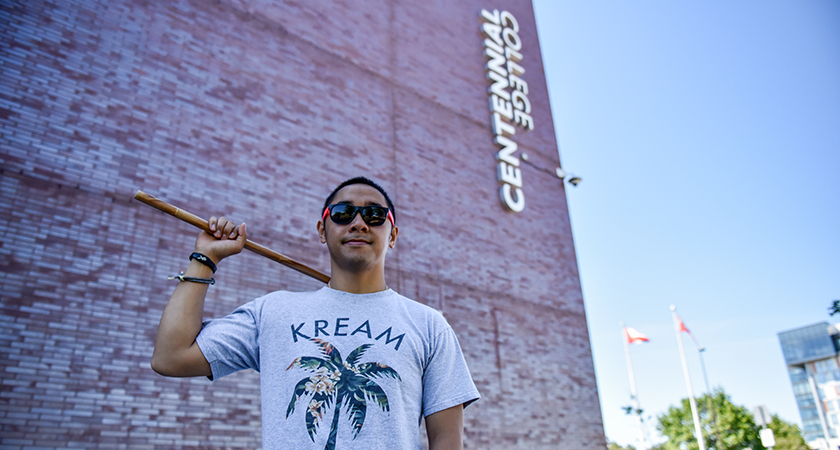 Every modern organization needs a recognizable brand to survive and professional communicators to help maintain that brand. A modern professional communicator has to do a lot of different things, and Public Relations at Centennial College teaches you a lot of those skills by treating the discipline as an art for storytelling. Urvil James decided to use that storytelling for good; tying it into something unexpected: Martial arts, yoga, marketing and philosophy. He went from learning how at our Pickering Learning Site, to applying it. And that’s not even the only thing he’s involved in. Here’s the story of his journey, how Centennial College helped make it happen, and how others can follow in his footsteps.

Urvil James initially completed a university marketing degree, and while there, he would discover that marketing had an unusual connection to martial arts and yoga, which he would then connect with public relations.

“I noticed that, while I was completing my marketing degree, a lot of it correlated with people’s personalities, opposed to what they were teaching us about mathematics and statistics,” he says, “So I decided to pursue yoga and martial arts to figure out what makes people tick on a less scholastic, less institutionalized level.”

“During that time, I was working as an instructor,” he says, “and I said I might as well get my public relations, because that’s what I already do as a marketer, on top of being an instructor, and the worlds are very parallel. They both deal with shaping narratives, but you can’t really shape a narrative in the marketing world unless you have the credential, or the exact know-how in order to shape it.”

Urvil James would go on to take Centennial College’s Public Relations program after hearing positive buzz about it online. Due to its close location, he’d chosen to take the program at our Pickering Learning Site, a satellite campus for students who don’t want to make the trip into the city (Centennial also offers the program at its East York campus.)

“I really liked it,” he says about the Pickering location. “Because of its close-knit size, it allowed us to gain one-on-one attention. We got to know everyone. Everyone within my group had the same classes, so it was kind of Elementary School-ish and we built bonds.”

“The biggest challenge was stepping outside of my comfort zone,” he says of his experience in the program itself. “They made you do exercises on presentation skills, for example. That was very difficult, because I’m not a big fan of public speaking, even though I’m an instructor.”

“But then the biggest plus would be learning to shape stories effectively because that’s what we do as marketers,” he says. “How do I push what I believe onto you and make you believe it, too?”

“I’d say the design course was the most useful,” he adds. “It was really good because it taught me about InDesign, and then I just took the principles from there and expanded on them myself. The writing course was also essential.”

After graduating, Urvil James would go on to become a busy man, using his skills to enhance and even start a new venture. His first venture was GottaLightMyFire.com, a consulting company that he built in Hong Kong while being a part of the Ontario Global Edge program in university.

“While I was there, I developed this idea of helping smaller companies, because we had to help small businesses in Hong Kong and learn to market them,” he says. “From there, it just grew and grew. Now it’s evolved further because public relations has allowed me to work more in the social media world.”

His second business is his own yoga martial arts studio, formed due to continuous practice, belief, and his connection to marketing.

“I primarily do all the marketing, but I also instruct,” he says. "It’s all still in the same avenue of shaping stories.”

“I started to notice that there was a big spiritual component to martial arts,” he says, explaining his thoughts behind Persistence Academy, “but most martial arts schools are lacking in it. I've even coined the phrase ‘From Outer To Inner World.’ The outer world relates to martial arts, where it’s like, protect yourself, learn how to carry yourself. But then how do you handle the internal component, the inner world? That’s where yoga comes in, because it’s a self-reflection. Most people don’t actually take the time to pursue self-reflection. We’re so caught up in our outer world.” Through the company’s charitable wing, Persistence Karma Projects, the Academy also does charity work to raise money for at-risk and orphaned girls in Peru.

His third major project is a website called TnB Theories. “It was built off of my own inspiration and desire to practice,” he explains. It’s a blog site where he would post five new things that inspired him each day. “Over time, it just blew up into a huge following.”

It’s not about following him

“Follow your intuition and your inspiration,” Urvil James says as advice. “Don’t focus on what I do, focus on what you do, because all I did was continuously follow my gut instinct and inspiration. A lot of people are so caught up in comparison and want to be rich and famous, but they don’t know what it takes to get to that point, and even if they’d really like it. So, don’t look at something I’m doing, look for something that you want to do and do that.”