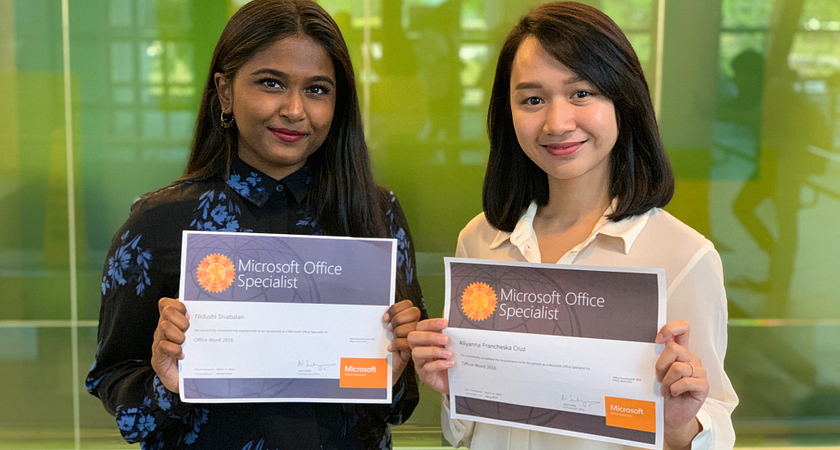 As an Office Administrator, you’re the first point of contact between an organization and those it serves, whether it’s a corporation, the law, or the health sector. Centennial’s Office Administration programs provide what students need to succeed in today's office environment, and sets them up to earn certifications like Certiport’s Microsoft Office Specialist Certificate. It proves that Centennial College Office Administration students are a cut above, and in this case, two of them proved they were really a cut above.

How they got here

“I was a tourism management student in the Philippines,” says Allyanna, explaining how she came to Centennial College. “When I moved here, I noticed that some of my relatives and friends were in the medical field. That’s why I took Office Administration Medical, because of those connections.”

“I was at the University of Toronto doing communications and media first,” Nidushi says. “The program was great, but the environment wasn’t right for me. Instead of taking a gap year to figure things out, I thought in the meantime I’d find something more hands-on to help me with my resume and to help me find out what I wanted to do. So I came here, and Office Administration Executive seemed like something for me.”

There’s more to Word than you think

“I’ve been using Word since a little kid to do projects, and you think it’s easy,” Nidushi says. “So you think, why is there an entire course on this? But when the course actually happens, you start to realize how many functions it has, and how many things you can execute with it.”

“The environment’s actually really intense,” Nidushi says about the MOS test itself. “Everyone’s super quiet and super nervous, but otherwise it’s just a regular school test, only there’s a timer, and it’s 50 minutes.”

“The actual exam is out of 1000,” explains Tina Norton, one of their Office Administration teachers, “and you need at least 700 to get a certification. With that certification, you’re considered a Microsoft Office Specialist, and this attests to your proficiency in the application.”

“The reason Allyanna is number one is because she not only received the highest score, but also the quickest time,” Tina adds. “That’s how they’re going to be judged at the World Competition as well.”

“I was so shocked,” Allyanna says, when she heard about her unexpected victory. “I didn’t think that I was going to be the top one, because I’m not from here, and I just moved two years ago. It’s overwhelming, and I’m so excited to go.”

“I got a phone call from Tina Norton,” Nidushi says about her second-place win, “and the first thing I thought was, did I fail a course? For a second, it didn’t register, because if it was a Toronto thing, that would have clicked easier, but when you said Canada, the entire country, that’s insane. It still hasn’t clicked.”

“There’s only three students from Canada going to New York for the competition, the Canadian champions for Word, PowerPoint and Excel,” Tina says about the next leg of Allyanna’s journey. “I understand there’s 150 different countries represented there. And you should see where they’re staying. The competition and hotel is right in Times Square.” The winner of the global portion competition will receive $7,000 for tuition, the runner up gets $3,000, and the third-place winner gets $1,500.

Meanwhile, Nidushi is heading to Japan for a short international program in the summer, which she also had to compete to get into, as one of only 10 students from 500 applicants.

“My program is all about communicating with and helping other people,” Nidushi says about office administration, “so I thought that by going over there I could meet more people, learn the language, learn the culture, and become more confident with people over here.”

“Look at what their resumes are going to have!” Tina adds. “Number one and number two in Canada, on top of the benefit of having an MOS Certification on their resumé. When you actually have certification that says that person knows Word, which means they can go into the workforce and not require training.”

So, as the two students that literally did the absolute best they could on the MOS certification, what words of advice do they have for other students looking to ace them? Turns out there isn’t much of a trick to it.

“Just be patient, and practice,” Allyanna says. “When I was practicing, I’d bring my laptop to work for studying during my breaks.”

“Work with others, don’t just practice by yourself,” Nidushi adds, “Because everyone else has their own ideas to incorporate.”