Your guide to co-op success, as told by a Centennial student 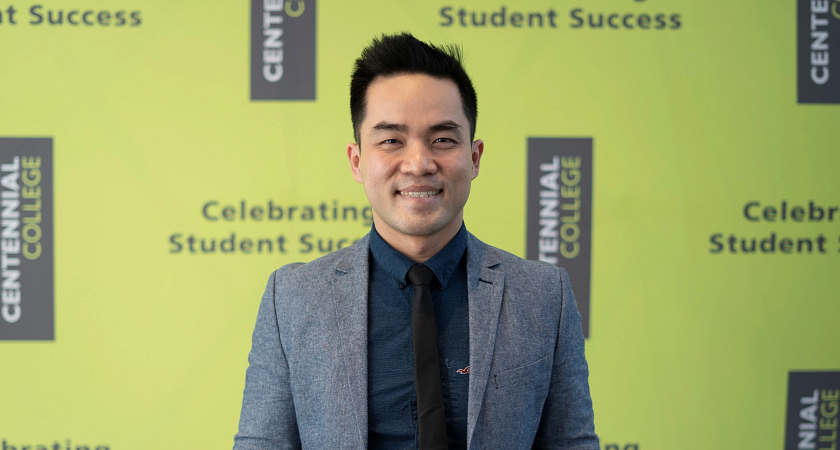 The best way to learn is by doing. That’s why so many of Centennial College’s programs offer co-op education, where you can apply what you learned in the classroom in an actual workplace. William Tran had a unique experience with his co-op placements when he took our Business Administration - Supply Chain and Operations Management program. In between his two co-ops terms, the COVID-19 pandemic hit, nearly derailing his second one. But he persevered and, with help from the college, found his footing. Here’s how to succeed at a co-op placement and what to do when your plans are derailed by a disruptive event, as told by a Centennial College student who navigated it all.

The journey to Centennial College

William had already earned a bachelor’s degree in English Linguistics back home in Vietnam. But it was the job he took in the meantime that caused him to change his thoughts about his eventual career.

“After I graduated, I took my first job at a shipping line, and it totally changed my perspective of my future career,” William explains. “I realized supply chain management is my passion when it comes to my career that I want to pursue. After a year working at this company, I started looking for more opportunities to advance my education, because I saw that I needed a very solid foundation of knowledge to get ahead in the field. Studying abroad was always a dream for me, too.”

Following that dream, William decided to come to Canada and enroll in our Supply Chain and Operations Management program at Centennial College.

How he got his first co-op

After four semesters of classroom learning, William’s first co-op placement in the program was at TJX Canada, working in the logistics department.

“It’s really coincidental that I got the job,” William says. “I saw a posting from TJX Canada on Glassdoor, and I applied for it. I didn’t even know what the company was, or their great reputation in Canada. Their job description was just very interesting, and I felt like they put a lot of effort into it. Later on I found out that TJX Canada has strong connections with our school, and those jobs are posted on our HireCentennial portal, as well.”

One of William’s keys to success was dressing for the job he wanted, something he recommends other students do.

“In the first round, I had to record a video answering questions about myself and send it back to them,” William explains. “It’s the first time I’d ever had a digital interview, and I said to myself, I have to take it seriously, so I dressed up as though I’m going to a real interview – and that’s the point that made me stand out, I think. My recruiter called and made me an appointment with the hiring manager just two days after I submitted my video.” But that wasn’t the only tip in his book.

“A week after my interview with the hiring manager, I sent out a thank-you letter, saying I really appreciated the time and effort your company put into the recruiting process. The job perfectly fits my career goals and I would be thrilled to work for such a renowned company as TJX,” he continues. “Right after I sent the thank-you letter, the recruiter called me again and offered the co-op. ”

What he did at TJX

“I worked in a team called merchant/vendor relations. We bridge the gap in understanding between the merchants, the vendors and the logistics department. Most of the time, when the merchants or the buyers make purchases for the vendors, they want the goods in the stores at the right time, and don’t really care about the logistics of the purchase, like how to bring the goods from the vendor’s place to the store. So we are there to educate them. What’s more, we establish metrics to evaluate the logistic performance of our vendors.”

“I was brought into every meeting with vendors, with merchants, with the other teams, so I had a chance to really observe and raise my ideas,” he says about his experience. “At every meeting my managers would ask me: what’s your idea, what do you think about it? It’s a very good opportunity to not just do some operational work, but to really think about the challenges of the company that put the information in with the knowledge we learned at school.”

William finished his co-op in four months, and then had an offer for one at Aecon Group, Inc., the biggest publically-owed construction company in Canada, as a procurement specialist. But real life would have other plans.

Co-op during a pandemic

“I applied through HireCentennial for the job posting at Aecon Group,” William explains. “I know that the company is very big in Canada, and has very robust connections with our school, so when I applied for it, I got the call a week after my application.”

“One day after my interview with the hiring manager, they contacted me to offer the job. I remember the recruiter called on Tuesday to offer me the job verbally, and on Wednesday, she called again to say that because of the pandemic she cannot issue the offer letter today, but she hoped to in the coming weeks. Two weeks later, she called and just cancelled the internship, saying that the company is not really in good condition to take in any co-op students now, and she was really sorry for that. I was shocked at that time, because procurement is the job that I want to do in the future.”

So, what do you do when your co-op is cancelled?

“I kept in touch with the recruiter,” William explains. “Every two or three weeks, I would call her again, and ask her how the company was doing, if everyone is well, if they came to the office or are working from home. And you know what? Two months after the cancellation of my internship, the recruiter called me again, and said: Hey, William, we’re about to open the internship program in the fall, would you like to come back and work for us? We’d really like to have you on the team.”

For William, it was a happy turn of events. Due to the circumstances, they had to adjust the length of the term and make it into a remote internship, but William also managed to get a raise out of it. He’ll be starting in September, and after four months he’ll return to Centennial to study.

“My experience and education so far really align with each other and align with my career goals,” William says. “I applied a lot of things I learned from Centennial’s courses to the job. The college did a very good job of not only giving me the solid theoretical knowledge, but also giving me exercises and assignments so that I can apply what I learned by doing them – and those assignments are very similar to the tasks I did at the company. The gap between the classroom and the real world is very small. What I learned is what I did in real life. That’s helped me to prepare myself so that I would not be surprised by the real tasks in the company.”

“I also had the chance to learn about Canadian workplace culture when I studied at Centennial,” William says, “because the program is designed by professionals in the field and taught by excellent Canadian professors. I always asked my professor, what is the Canadian culture like? What do Canadians do in this situation in the workplace? And I got a lot of inputs from my professors. When I go into the workplace, I’m not surprised by the working culture in the company; in fact, I integrated well into the environment. That’s something my manager commended at the end of my co-op term. She said that I got along well with people on the team, and that’s thanks to my experience at Centennial College.”

He also credits the college with helping him through the tough times when COVID-19 caused problems with his second co-op.

“My co-op advisor was the one who advised me to keep in touch with the company now and then to make sure that if they opened the internship again, I will be the first person they think of,” William says. “When the company called back to offer me the job, I immediately called my advisor, and she guided me through the process of negotiating with the company. She supported me not just professionally, but also personally. During the summer semester’s job hunt, I was so depressed, because of all of the chaos around. But my advisor encouraged me and consoled me many times.”

“If I were doing it alone, I would never make it this far,” he admits. “It’s all about the help and support, and continuous assistance from the co-op department.”

“The first advice I would give to my fellow students is that they should know what they can do with what they studied,” William says. “When I first sat down to look for my co-op job, I had to jot down all of the classes, courses and knowledge from Supply Chain Management, and what job I could do with the skillset I got from Centennial. So, knowing what you can do and what you want to do in the future is very important, because I see a lot of my friends searching and applying for everything. It’s not a very good practice, because when you’re applying for anything, you might not have enough time to customize your resume/cover letter and make it the perfect fit for the job.”

“Whenever you get into the co-op job, be as serious and as professional as you can, as if you are going to do a full-time job, and that spirit will show to the employer that this is capable student with the right attitude, and maybe when you finish the job, you can get a full-time opportunity.”

As of right now, William has completed four semesters of his program and one term of co-op. He has his Aecon co-op to do, followed by the final two semesters in the program.

“I think procurement would be my long term career goal,” William says. “In fact, my position at Aecon is Procurement Specialist, so it’s a very good start for my career in the future.”