Welcome to the Story Arts Centre

Located close to downtown Toronto, just minutes from Pape Subway Station, the Story Arts Centre sits at the heart of Toronto's media, design, culture and arts hubs. The campus is a meticulously restored, 104,000-square-foot modernist masterpiece that serves as a dramatic backdrop for students to learn and tell their stories.

The campus has a storied past. It was originally built as the Toronto Teachers College and achieved worldwide fame as the setting for Degrassi High, one of Canada's longest running and most successful television productions, which was filmed on location from 1989 to 1991.

Our post-secondary, post-graduate, and joint and degree programs are all highly regarded by their respective industries. 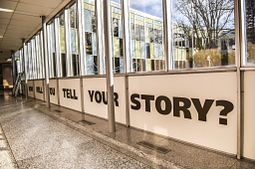