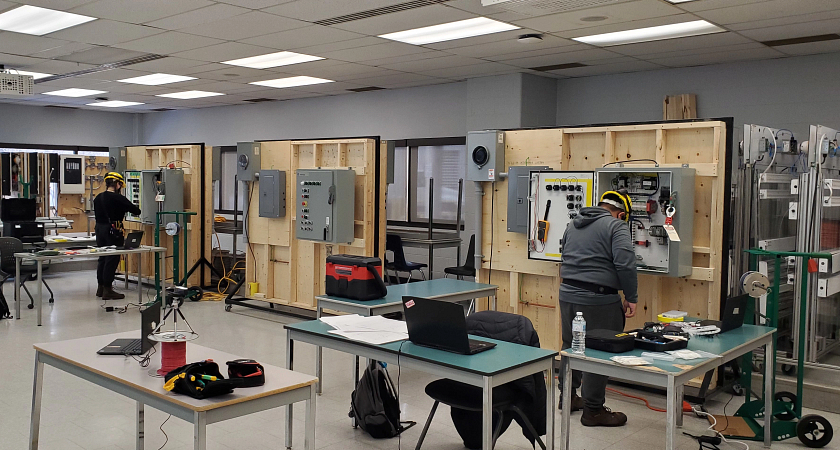 Matthew Natividad was always fascinated by anything involving math, physics, and making things. After completing a year of a physics degree, Natividad wanted to combine his interests with more hands-on training. He enrolled in Centennial College’s Electrical Engineering Technology program. Three years later, Natividad’s decision has paid off. Not only is he a Centennial graduate, he is also the 2021 gold medal winner in Skills Ontario Competition’s Automation and Control category.

“I was watching the Skills Ontario closing ceremony live stream, and when I saw the third and second place names pop up, I wasn’t feeling too sure,” Natividad says. “Then I remember screaming my lungs out. It was quite exhilarating. I was the first student from our program to get gold in this category.”

Natividad’s participation in Skills Ontario — Canada's largest skilled trades competition — is an example of the various ways in which Centennial affords unique opportunities to learners. After completing his co-op term at Centennial as a lab technician, it was Natividad’s co-op host who asked if he was interested in taking part.

“At first, I was nervous to compete,” says the Electrical Engineering Technology graduate — who is currently deciding between entering the industry or taking advantage of Centennial’s educational pathways with a wide network of universities to pursue a bachelor degree. “But then I thought even if I didn’t win, I would learn a lot.”

Typically held at the Toronto Congress Centre, this year’s Skills Ontario received digital treatment to accommodate COVID-19 restrictions. Natividad and his fellow Centennial Automation and Control contestant (Lindsey Rupert, who took home silver) competed from a Progress Campus lab. Virtually monitored by Skills Ontario officials, they were challenged to wire and program a programmable logic controller (PLC) and to ensure all of their connections were correct.

“I hadn’t worked with PLCs since Year 2 of my program, but our teachers were so supportive and didn’t hesitate to assist us, check up on us, and give us tips,” Natividad says. “Getting help from former electricians and journeymen was awesome, and it refreshed a lot that I had already learned. The program did an awesome job of teaching us drawing interpretation, which was a key factor in wiring, and my Advance Control Wiring course came in handy too. I also think co-op was essential in how well I did because my experience making panels and wiring over the summer really helped.”

In addition to getting to reapply the PLC and other knowledge he acquired in Electrical Engineering Technology, Natividad says Skills Ontario was also an opportunity to experience what he anticipates it will be like to work in the trades.

“It was stressful, but I felt like it was great practice for the field because you have to know how to work under pressure,” he says. “It improves and changes the way you think. You find yourself asking, ‘Okay, what have I completed? What’s my next step? How can I route this faster?’ It’s an opportunity that really touches on your critical thinking skills.”

In addition to Natividad and Rupert, 18 other Centennial College students won medals at the 2021 Virtual Skills Ontario Competition.