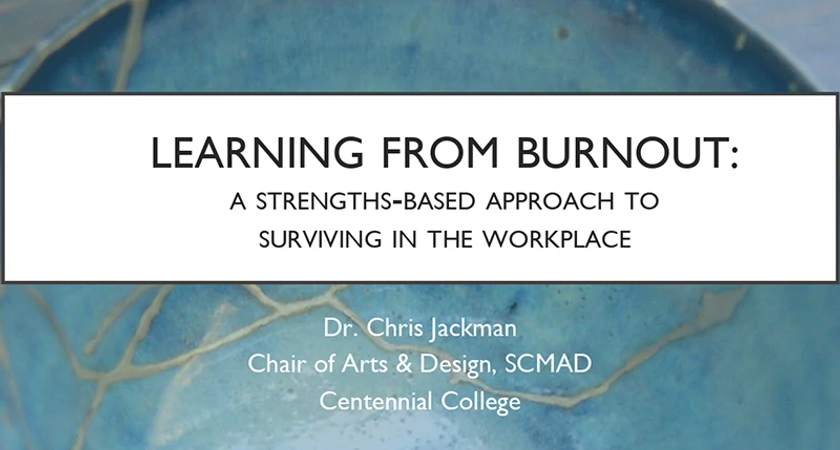 Dr. Chris Jackman, the Academic Chair of Arts and Design at Centennial recently presented a talk on Zoom to many attendees called, Learning from Burnout: A Strengths-Based Approach to Surviving in the Workplace. This personal, yet informative, talk allowed Chris to open up about his own mental health and his experience navigating his personal and work life. He provided listeners with his understanding of burnout and burnout recovery as a way to assist others in possibly recognizing it within themselves, especially seeing how common it can be. He also presented lessons that stem from his experiences in life, in the workplace, and in the time he took off from work.

Within his talk, he said that for the better part of a year, he had some strong signs of burnout that one would often recognize as more general symptoms, such as physical and emotional exhaustion, cynicism and detachment, and a lack of accomplishment, but he says those characteristics were not uncommon for department chairs to experience on a semi-regular basis to varying degrees. Chris also experienced subtler cues such as getting specific kinds of headaches when he would get really drained, a mild buzzing in his ears, his speech would slow down, and he would lose focus. This is where his first lesson stems from- recognize your signs of burnout. “What are the specific, out-of-the-ordinary changes that might indicate not everything is working the way that it has been, and probably not the way that it should be,” he says. In the workplace, these main, as well as subtle, characteristics he was feeling ultimately impacted his overall experience. He explains, “I was caught in endless cycles of counterfactual thinking. I was cynical and angry about my workload and I felt like I was working as hard as I could, but I also felt like I must be lazy and a failure for not working more, and if anyone offered to help then I would insist that this was something I was able to do and turn them down. I felt trapped in an impossible set of responses, completely unable to think of an alternative.”

One’s mental health plays such a large role in all aspects of life. Chris says, “Whenever anyone is confronting a mental health crisis, a big part of that challenge is the way in which it negatively impacts almost every element of your life. It’s also scary because then you also need that extra support from all those same elements of your life. I needed much more support from my family and my friends, I needed much more support from my employers, and you don’t know if necessarily you’re going to get that warm reception. I’m very lucky that, certainly emotionally, my colleagues were there for me providing support and that was critical. I also had that from an employee relations standpoint; we had a number of services set up with human resources that would allow for me to very practically take the time I needed in order to  focus on my recovery and to return to work in a way that would support my continued recovery.”

Fully recognizing your situation for what it is, and not what you expect it to be, is also such an important step. “I think something important to know is that when you’re talking about returning to work, especially on the heels of a burnout or a mental health crisis, it’s never going to just be business as usual especially right off the puck because there are so many factors connected with how you now need to prioritize and navigate your wellness, how your energy is completely different, and how your relationship to yourself and your work has been completely upended. So, returning needs to be a gradual process in order to build new habits, new skills, and also to consolidate the resources you need in order to make this sustainable again. That was a big focus of my talk, is about the ways in which burnout and mental health is a holistic problem and it requires holistic solutions. Just because you’re now engaged with therapeutic interventions, like counselling or medications, doesn’t mean that suddenly nothing else needs to change and nothing else needs to give,” he says. This leads to his second lesson- recovery and prevention require a holistic approach. Chris recognized that “workplace mental health doesn’t begin and end in the workplace; it requires the cultivation of resilience across all these areas.”

When Chris began to fall into the pattern of calling in sick from work, he went to a walk-in, stated his symptoms, and was referred to a psychiatrist. However, after a not so pleasant experience with them, he ultimately ended up receiving the most fitting advice through a psychiatrist a friend had that he was able to set up an appointment with. After creating new hours at work and working with his psychiatrist and case manager, Chris was able to work up to full-time hours again, but eventually ended up “clocking out a little early one day after a really rough meeting” and not being able to go in the next day. This led him to his third lesson- nobody knows what you need, and you might not know either. His case manager asked him what he needed in order to succeed at work, but Chris didn’t know. He loved his job but he also felt like he was failing. “That’s when it occurred to me, maybe I was in a no-win scenario, and fighting it was only making it worse,” he says. “I had to pause, question my instincts, take a look at what was going on in my environment, and start thinking about how to re-direct my energy.”

His fourth lesson- your bad habits might be your best features came about when he realized the catastrophic thinking that often made him feel like he was failing, actually comes in handy. “Thinking of worst-case scenarios helps me prepare for them, helps me respond to crises, leverage new opportunities. It feeds problem solving, careful communications, quality control, attention to detail, forward thinking,” he says. After starting to recognize his situation to the fullest, along with many other influential decisions, Chris was able to make more specific choices that would help him succeed in the workplace. “I was gentle with myself, consolidated, and then within a few months, I was back to full-time hours and a full-time slate of responsibilities,” he explains. This led him to his final lesson- don’t spend energy, collect and invest it. “I don’t think about my energy as a finite thing anymore. I’m not a car with only so much gas in the tank every day, trying to measure it out for every mile. Energy is a resource that can be replenished, and that can be by putting your efforts into things that feed and excite you. By investing a little, you can get more back.”

It was important for Chris to tell his story for many reasons. He says, “There is still a lot of stigma around mental health and it’s very challenging, I think, for people who are around you to know how to respond… I really reflected that I’m in a position where being upfront about my mental health status, was not going to be a direct threat to my job and where actually modelling transparency, would be a benefit to my colleagues, but especially to our students. In so far as I was able to do so, I really try to, and I have tried to, make it clear that when I was away on leave, I was away for mental health reasons and to be very transparent about the services and resources I have required and continue to require to do my job now. But I also feel comfortable in saying that I am fully capable of doing my job and performing at a high level and the fact that this is something still part of my life, doesn’t make me a less of a person or less capable of doing the things I want to do personally and professionally over the long run.”

Chris also acknowledges his privilege in this situation. “I do want to lean on the point that so much of my ability to take time and have the resources that I needed to fully recover, is grounded in some really deeply profound privilege around having an employer that is equipped to support me, that cares to support me in that way, about being in a country and geographic region where I have those resources at hand, being within a family and a social structure that supports me taking advantage of those resources, and that has the literacy to talk with me about this and engage with my issues.”

When discussing mental health with students, Chris has found that they have a very compassionate literacy around mental health issues. He says, “It’s something they’re comfortable talking with and engaging within their peer groups, but that doesn’t apply across the board, there’s a lot of differences so I think that the work of breaking down stigma, is still really important. It’s not just generational, it’s personal, it’s cultural, there’s a whole lot of factors and so my heart really does go out to people who don’t feel comfortable taking the next step of contacting a counsellor, of reaching out for help, because when you are in crisis, that is a really difficult time to break down those deeply ingrained habits or perceptions. It’s not a failure on your part that that’s a challenge. However, that’s why when I talk to students, especially at the beginning of a new semester, I recommend reaching out in advance to just find out about what it’s like, to get a team in place, and to get a sense of if the worst were to happen, what could you do?”

Chris has presented this talk previously and a question someone asked him stood out. “Someone asked me at a prior conference where I gave this talk, ‘what was your turning point or is there some sort of lesson that you can pull out of this’… I said back to them, not really. There is no redemptive arch to this. This is just a negative experience, it was bad, and there is no point in my history where I would choose to go through that ever. Where I am now, I want to try and make something positive out of what I’ve learned and do something with that. But it is hard, it’s bad and there are very few bright spots to be found within it, and that’s okay.”

A final note that Chris says that’s key is, “You might be in the same storm as someone else, but you’re not in the same boat.” It’s important to look within, recognize the way you’re experiencing certain situations, and most importantly, reach out for help. One recommendation Chris mentions that is immediate is 24-hour helplines where you can call and have a chat. However, he also recommends getting together a team of professionals, if possible, so that if a situation were to arise, you’re prepared. Reaching out in any capacity and recognizing you need some help are signs of strength, not weakness.