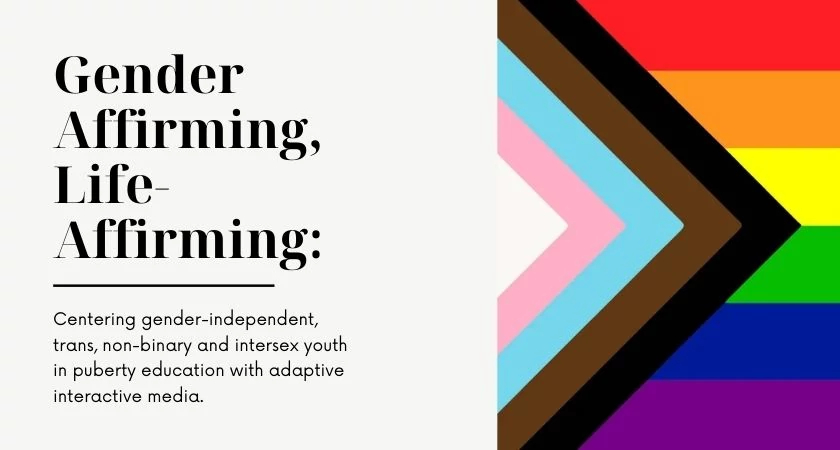 Centennial College has received $360,000 in federal funding from the Community College Social Innovation Fund (CCSIF) offered by the Natural Sciences and Engineering Research Council of Canada (NSERC) to create an online educational, gender-affirming resource for young people who are gender independent, trans, intersex, and non-binary.

The research project, titled, “Gender Affirming, Life-Affirming: Centering gender-independent, trans, nonbinary and intersex youth in puberty education with adaptive interactive media” will develop over the next couple of years until it can roll out officially.

Making of the project & how a book ignited it all

The project was developed by Dr. Chris Jackman, Chair of Arts & Design at the School of Communications, Media, Arts & Design. Thanks to a previous project he developed on VR storytelling Regent Park, Chris was already aware of the CCSIF grant, and another round of applications was coming up. “I was conscious of the parameters of that grant and very interested in how it brings together colleges and our innovative potential with our community partners to solve real-world issues.” He continues, “As I was considering that deadline, I am part of a group for parents of gender independent kids and because my own son is trans, and of course we definitely celebrate that, we are very conscious of making sure that we have all the resources that we would need in order to support him in the way he needs to be supported.”

Within that group, Chris explains that one of the facilitators spoke about a book in the process of being developed by a publisher named Flamingo Rampant, who is now one of the partners working on this project. “They were creating a book in the style of a choose your own adventure, targeted for young people who are gender independent, trans, intersex and non-binary, and it would be specifically about puberty health education.”

The topic of puberty, particularly for youth who identify as gender independent, trans, intersex and non-binary, is something that is not talked about enough and that lacks sufficient resources. Chris explains, “For young people within that demographic, their path through puberty can be quite different. They may connect to questions about their body changes, about hormonal interventions, they may have questions about surgical interventions, and they may have questions about a range of complexities. Meanwhile, it's also a very underserved population where young people aren't necessarily getting sophisticated information that they need at a particularly complex time, either through their healthcare providers or various supports around them.”

When Chris heard about the book, he immediately thought it was fantastic. It later occurred to him that it would be great as an online, interactive resource so that it could have an even broader reach and what the college could do to bring it to life.

At the publishing company, Flamingo Rampant, Chris spoke with S. Bear Bergman, who is the project partner there, and he says he was very excited by the prospect. Next, they spoke to Action Canada for Sexual Health and Rights and they also got involved in the project. Chris says they are “an organization that has been especially dedicated to promoting effective sexual health education for all across Canada and around the world, but, of course, recognizing that there remains a need to provide essential puberty education to youth who are trans, intersex, non-binary or gender independent.”

Chris continues, “This really aligned very well with their needs, and we saw a great opportunity to collaborate in bringing this forward. A real advantage of this resource is that it foregrounds the identity and the needs of the user. It doesn't prioritize the experience of cis-bodies and then treat everyone else as other. Our users will get exposure to the information that they need; they will be able to follow a path that is appropriate to their own understandings of puberty, of their bodies, and of their relationship between those two. I think that in and of itself is also a really key deliverable for this project as a whole.”

There are now a group of individuals working on the project to assist in its development. Chris says, “We worked especially in partnership with ARIES, the applied research area for the college, who really did so much of the heavy lifting and will continue to be our leading partner in the implementation of this project within the college. We are also collaborating with faculty at the School of Community and Health Studies, really reflecting that this is a college initiative that is interdisciplinary and collaborative, reflecting the values of the whole institution.”

The interactive resource will develop over the next two years, with the support of an advisory council, multiple health specialists, and a youth advisory group, which Chris says will help ensure that the information reflected in the resource is both accurate and presented in an engaging way that is encompassing of the experiences within the project’s target demographic.

After two years, the resource will roll out officially, while the team checks on its usage, in addition to holding focus group studies to explore its impact. Chris says, “From my perspective, as somebody who is deeply invested in social innovation and as someone who really believes in the potential of colleges to equip and engage our students to deal with the issues of our day, this is a really fabulous opportunity to see those come to life. As a parent and an advocate for a kid who is going to need exactly this kind of resource one day, I feel especially fortunate.”

This resource will be such an important and necessary tool for youth to access, and we applaud everyone involved in its creation and development.