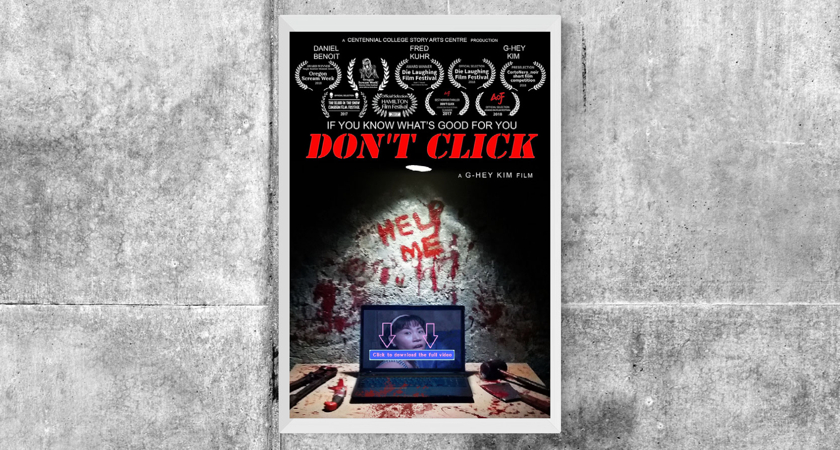 The horror genre is filled with thrilling films that are sure to keep you on your toes, and G-Hey Kim, a 2017 graduate of the Advanced Television and Film – Script to Screen program, has done an impressive job contributing to the genre with her short-film Don’t Click. The storyline centres around a man who receives an email with a link to a graphic video. When he clicks on the link, the video starts playing, but only to a certain point. He is then presented with the option to continue watching, and that is when things take a turn, as his decision impacts the trajectory of the story.

Created as a solo project in her program’s second semester Directing 2 course, G-Hey first came up with the idea of the film while studying in the campus library. “I realized how much people rely on the Internet, not only for information gathering and social connections but also for entertainment. With so many content-sharing platforms at our fingertips, it has never been so easy to access anything and everything - and I really do mean everything - online.  There’s no shortage of dark, graphic, violent videos available, just waiting for an audience to click.  So, I wanted to make a short horror film about the disconnect that can take place between criminal and pornographic violence and the people watching it online. Although I watch all kinds of films, one of my favourite genres is horror. Not only do I enjoy watching scary movies, I like making them,” she explains.

The making of the short-film was a collaborative effort, especially since the lead actor and the crewmembers were her classmates. She says, “While I was making the film at school, I felt everything was set up for me. After polishing the script, the most important things were the casting and the locations. The place that I shot for the snuff film scene was the basement of my previous landlady's house. I didn't need to decorate it at all - it was musty and squalid enough, [which was] perfect. I also met some amazing actors and great crewmembers in the program. One of the lead actors, Daniel Benoit, was a classmate of mine, [and] so were all my crewmembers. The other lead actor, Fred Kuhr, happened to be auditing my Directing Class 2 that year… Without all of them, I couldn’t have made Don’t Click.”

Before entering the Script to Screen program, G-Hey lived in South Korea, where she earned a bachelor’s degree in Creative Writing and an associate degree in Theatre. She says, “While I was studying theatre, I took several filmmaking classes. It opened up a whole new world for me. I found that watching films was one thing but that making films was another. Filmmaking gradually became my passion. I wanted to broaden my horizons and expand my mind so I took a leap of faith and moved to Canada in 2010. After living here for a couple of years, I realized this would be a good place to build my career as a filmmaker, and so I decided to become a Permanent Resident. I got my PR card in 2015. The following year, I enrolled in the Advanced Television and Film Script to Screen program at Centennial. It was my first step into the industry.”

Throughout the program, G-Hey had a busy schedule, which she describes being filled with individual projects, class projects, assignments, tests, workshops, and more. Reflecting on that time, she says it was extremely valuable. “I learned many priceless lessons about filmmaking. I realized what my strengths and weaknesses were as a filmmaker, what I had to work on to make better films, what qualities I needed to be a good director, how I could achieve my goals in the film and television industry, and many other things I couldn’t learn from books or online,” she explains.

She continues, “Some people think you don't need to take filmmaking at a College or University because there are so many books and online tutorials available. Yes, there are, that’s true, but books and online tutorials don't tell you what your strengths and weaknesses are or what qualities you need to develop to become a better filmmaker. They don’t give you feedback on your films or your scripts, either. Yes, they give you some ideas, general knowledge and skills, but nothing specific to help you achieve your goals. That's why I think post-secondary filmmaking programs are so valuable.”

Don’t Click was created in 2017, and only a couple of years later, independent film distributor, Gravitas Ventures, acquired worldwide rights to the film! With the same name, G-Hey’s story turned into a feature film starring Valter Skarsgård, Mark Koufos, and Catherine Howard. The film was released on December 11, 2020, on platforms such as YouTube, iTunes, Amazon, and Google Play. You can read more about the feature film here.