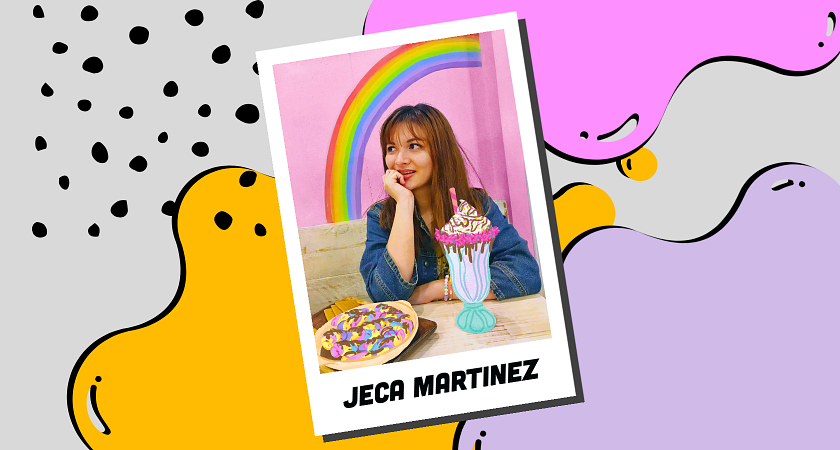 Jeca Martinez is a student in the Advanced Television and Film – Script to Screen program. However, she is no stranger to Centennial, as she graduated from the Lifestyle Media program last year. She also obtained a bachelor’s degree in Multimedia Arts in the Philippines in 2013, which helped ignite her fascinating journey in animation and illustration.

Jeca has created various online animated products for large brands such as Facebook, Hallmark, Google, GIPHY, and United Nations, and currently works as a part-time graphic designer at a web design and digital marketing agency, Fluency Digital Agency, in addition to working as a part-time animator for the Treehouse TV show, Miss Persona. She says, “I became interested in animation when I saw How to Train Your Dragon for my 19th birthday. I was completely enthralled by how the story took me along for a ride and wanted to create something that exciting. Since then, I’ve made a few animated short films, and my University thesis film, Cupid’s Serenade, has won some awards in Japan and the Philippines.”

With her background in animation, enrolling in the Script to Screen program has allowed Jeca to explore other avenues in the creative field that she wasn’t already familiar with. She explains, “I had always been interested in filmmaking and storytelling— it was one of my top choices when picking a program for University back in my home country, but I went with Multimedia Arts instead so I could learn a bit of each medium. After a few years in the animation and creative industry where I feel like I’ve built a pretty good foundation with my technical skills, I now wanted to learn more about how I can use these skills to tell a good story.”

Already, the program has been a rewarding experience for Jeca. However, it took some time to become comfortable in this new medium that she was studying. “I honestly felt like a fish out of water in my first few weeks. I felt like my peers had a concrete goal that they were working towards at the end of the program—some wanted to be DOPs, actors, and others already have a script or project they were currently developing— meanwhile, I wasn’t even sure what role in the film industry I fit in! But after speaking with my program coordinator about my concerns, he reminded me to relax, absorb what I am learning, and it will eventually fall into place; if anything, all the things we’re learning can be applied to any industry- marketing, medicine, food, fashion, etc, and they all at one point would need video production. After that conversation, it felt like I was given permission to experiment, play, and just have fun without worrying about an industry end game.

In terms of the material she has learned and the content she has created in the program, she says, “Overall I learned how to be resilient and creative with the limited resources I have, and to not be afraid to go a little out there with ideas. I also gained a really good understanding of the work it takes to create a film, especially all of the preparation before the first shoot day. I’m also learning to be more attentive to personal experiences and emotions because I feel like vulnerability makes for honest stories that people can see themselves in.”

No doubt about it, learning online can take some getting used to, especially if you are in a field that typically requires a lot of in-person contact. Now having adapted, Jeca explains, “Online learning was both good and bad. It’s good because we didn’t have to physically go to school every day—we could literally wake up a minute before class starts, login, and that’s that. It saves a lot of time and money. But it was also challenging to try to focus for four hours per class, six days a week. We were also missing some of that camaraderie that I think you only get when you’re physically in the same space as other people. We had one class that was half online and half in-person, and there was a stark difference in the overall energy and charisma that just doesn’t translate online. Despite the challenges, I’m grateful for the technology and the means that allows us to continue our education, as well as the efforts our instructors and program coordinator took to continually adapt to the COVID protocols. Having friendly, talented, and incredibly helpful classmates have helped immensely, and I’m so grateful to be part of this batch.”

The Potato Apple, which you can watch in the video above, is a short-film Jeca created as an assignment for her Directing class. She explains that the requirements were to make a three to four minute film that highlights a character’s journey, but with no dialogue so as to reflect that journey visually. “It’s funny because the concept came when I was trying to brainstorm a story for another class. I was so annoyed and out of ideas, that I jokingly wrote: Character: An Apple. Goal: To be a Potato. Apple no longer wants to be a healthy fruit, he just wants to potate. We were about to begin the final project for our Directing class when the second lockdown was announced, and we now had to think of a story that is doable given the new restrictions. The apple story, as silly as it seemed, suddenly had so much potential because it was something I could animate and do on my own —no crew or actors, no need to go out on-location, and thus less risk of catching COVID.”

Jeca underestimated a bit just how much time it would take to carry out this film. “I thought it would only take me two days to build the set and props, and three days to film, but it ended up taking a month and a half to prep, shoot, and edit a first version of the film. I was still making last-minute edits during our last Directing class before the holiday break while we were screening each other’s work. Even though the assignment was finished and submitted, to me the film wasn’t fully done yet— it was missing an establishing intro sequence, I wanted to reshoot two scenes, and I needed to polish the green screens, so it took me about an extra two and a half weeks spread throughout the holiday break to finally finish.

Despite taking longer than she thought, the result is incredible, and the thoughtfully carried out storyline that touches on self-esteem, social media, and self-love is outstanding. You can find more of Jeca’s work on her YouTube channel, Jeca Martinez Art, as well as on Instagram @jecamartinezart.