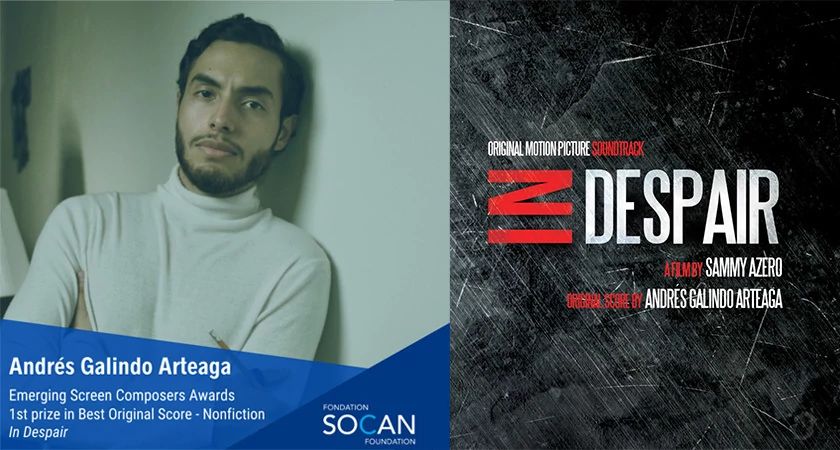 Music that is composed especially for a film (aka a film score) has the power to not only transform a scene but enhance the storyline as well as the experience for the viewer. The process of creating a film score and telling a story through music requires immense creativity and dedication, and Andrés Galindo Arteaga, a graduate of our Music Industry Arts and Performance (MIAP) program, did exactly that for the film – In Despair.

In fact, Andrés' outstanding work was so successful that he was one of the first-place winners for Best Original Score – Non-Fiction at the 2021 SOCAN Foundation Awards within their Emerging Screen Composers category.

How it all started -

Sammy Azero, the Director and Writer for the film, In Despair, reached out to Andrés, asking if he would be interested in working on his feature film. After already having done a film together the year before, Andrés was happy to hear from him again, but with the movie timeline matching up with the complete lockdown in Toronto because of the pandemic, Andrés was not sure how everything was going to play out.

Thankfully, the film was still able to be made, and that is when Andrés and Sammy met to discuss the score. Andrés explains, “Following the film, I asked him first what the story behind this project was and the ideas of the sound or tone he wanted me to implement throughout his feature. To my surprise, Sammy told me that the film was inspired by real events, and the context of the whole film centered on the story of a teacher at Ryerson that experiences profound hopelessness throughout the lockdown, to the point of leaving him in a state of delirium and chaos.”

During this meeting about the film, both Sammy and Andrés went through the rough edits and started spotting and discussing “where the music could have a space to talk and elevate the storytelling,” as Andrés explains.

He continues, “When I watched the film for the first time, I was shocked to see amazing footage of different scenes that they filmed while in lockdown, for instance, there were some interesting shots of the character entering Ryerson University when there was absolutely nobody in that building – props to Viktoriya Moskalyuk who shot this. On a side note, the cue I composed for that scene was titled Empty Halls and is one of my favourites in the film.”

The process of creating the score –

Once Andrés had a better understanding of the film, he got to work. “My process when I started composing this film was primarily to get my head wrapped around the introspective view of this character who was slowly falling into this dark path during the lockdown, and to prepare some themes for the “contrast” that was reflected in the arc development of the story. Since the spotting session went very well, I had a great map to work on immediately.”

He continues, “Overall scoring this film was somehow very therapeutic. Most of the music that came out was a way for me to express the fear and uncertainty around this whole pandemic, and it really helped that way.”

In terms of the score itself, Andrés explains, “The overall tone of the score is very spaced out, immersive, minimalistic, and powerful when it came to the dramatic parts of the film. The key was to maintain a subtle but substantial presence when there was a trade-off between the monologue of the main character and the score. This film was very monologue driven but it did make a lot of sense considering the agony, concerns, and drastic change that the main character was going through the course of the film.”

To apply for the SOCAN Foundation Awards, Andrés submitted three cues of the film, including a brief description of them, the intention of the music, and the emotional sense of the scene. “I picked key moments where the score had different nuances and parts that were very important in the development of the film,” he explains.

Winning first place, Andrés says, is a significant step forward for his career, while also being very reassuring for his work as a music Media Composer. He says, “One of the main aspects of doing this job is to problem-solve and bring to the filmmaker a piece of music that is meant to serve his or her vision. This distinction pretty much translated to be a kind way of saying, keep doing what you are doing, and so I am, onto keep making great collaborations and more music for films.”

Andrés began studying at Centennial in 2015 when he entered the MIAP program. Now, looking back at his time, he says, “I can say that one of the things that I learned the most was the technical aspects of film scoring in my Music Creation for Media/ Music Creativity courses, taught by Charlie Finlay and Darrell O'Dea. My ear training lessons were also super helpful to think and choose chords, intervals and things that could work on a specific scenario in a scene.”

He continues, “Big thanks to all my teachers; I learned key things from each one of them from theory to practice. In addition, Centennial gave me the possibility to connect with student filmmakers on campus, this being perhaps the most valuable aspect because that was what enabled me to pursue this path of creating film scores.”

As for what Andrés is currently up to, he explains that he is about to start to work on a pitch for a TV series and hopes to start working on another short very soon. You can keep up with Andrés’ work via his Linktree.